Our friend the elephant mosquito

Elephant mosquitoes have a well deserved name; they are giants among mosquitoes. Their wing span reaches almost half an inch. They have a formidably long proboscis; you would think that they may have a vicious bite. Not so, the good news is that they do not feed on blood like many of their relatives; instead they are often found on flowers, drinking nectar with their long tongues in a poor imitation of butterflies. Just like butterflies they carry pollen from flower to flower, so we should welcome them in our gardens.


The scales that cover their bodies are somewhat iridescent and their legs are thin and long, even more so than many mosquitoes. The males have long, feathery antennae of an intricate shape; better to detect the vibrations, the buzz emitted by females.

Not only are they pollinators but they also have a remarkable virtue. They lay their eggs in water, not in large bodies of water but in holes such as old tires or tree holes; the very same places where the larvae of many species of mosquitoes grow and prosper. The nice thing about elephant mosquitoes is that they feed on the larvae of their relatives. So, the adults are well behaved and don't hurt us, instead they pollinate flowers, and their larvae provide another service to us by feeding on the pests that give us so much discomfort or even transmit diseases. So, let us celebrate our friend the elephant mosquito.

Some flowers are easy to pollinate, wide open, with free access to pollen and nectar; an insect with no skills and no elaborate equipment can collect food without difficulty. Other flowers make things interesting; their pollinators have to figure out how to enter them and how to reach the hidden rewards. It is great fun observing the labors of some bumblebees visiting one of these "difficult" flowers.

Last summer my friend's garden was brimming with turtleheads and the turtleheads were brimming with visitors, not a great variety (I only saw bumblebees) but a large number. This flower deserves its name, it looks like the head of a turtle, with powerful jaws and a large cavity inside, where the nectar is hidden and where the important parts of the flower lay, the male parts which carry pollen and the female parts, which receive the pollen and produce the seeds. 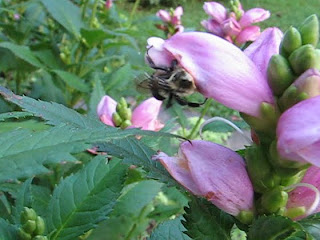 Young flowers, like the one above are not quite ready for visitors and clench their jaws tightly. This bumblebee tried in vain to enter the blossom and never got more than its head inside so it gave up the effort and tried a different one. 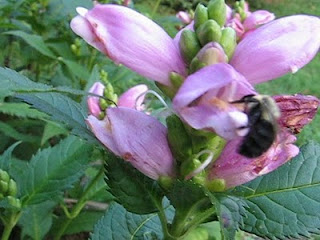 The next flower must have been just right, the entrance was slightly open, and this time it entered without difficulty and spent several seconds out of sight collecting whatever reward it could find, perhaps just pollen or nectar, more likely both. 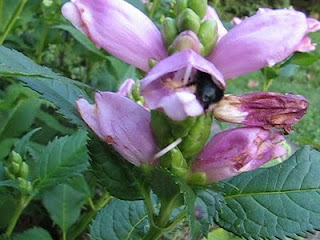 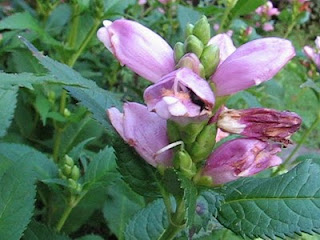 The fun started when it tried to leave the same way it came. It kept backing up but, no matter how hard it tried, it just couldn't get out tail first; so it went deeper inside to make a U turn; out it came, head first and briskly flew away. 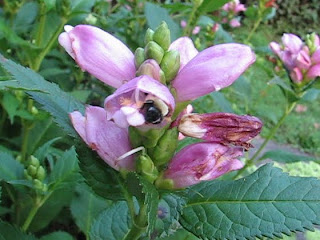 It promptly learned the way in and the way out and when it entered other flowers it turned around without hesitation and emerged head first. Interestingly, in some cases it entered the right side of the mouth and left through the left. Not all flowers were so hard to exit; some, maybe older ones had loosened their jaws a little further, the mouth stood agape and bees came and went with no difficulty and no need to turn around. You can see it all in a video.

It makes you wonder why bumblebees persist on visiting difficult flowers and why flowers make things difficult for their pollinators. From the point of view of the flower, it must be advantageous to select its clientele, allowing only those with the right equipment (e. g. a long tongue, powerful muscles, the correct size) and with enough intelligence and memory to figure out what to do. In this way they ensure that their pollen gets carried to other flowers of the same species and doesn't get wasted on different flowers.

To satisfy the demands of such a clientele the flower has to offer the right incentives. So, such flowers are likely to yield large amounts of nectar, richer pollen or both. Thus, the reasons for a bumblebee to visit such flowers become obvious; it is worth the extra effort if the recompense is far superior to the one offered by plain, easily accessible flowers.

Bumble Bees, the Pandas of the Insect World

A Night in the Life of a Working Mother

It is spring but you wouldn’t know it judging by the temperature. Here in such northern latitudes, Ellesmere Island to be more precise, winters are long and brutal; spring and summer last no longer than a sigh. So, this morning the air is crisp, and I would call it bitter, as I am not used to this weather. The frost covered grass crunches under your foot with each step you take. However, there are flowers all around. A carpet of small flowers is growing hastily so that the plants can complete their cycle before winter arrives. But, why are there so many flowers? Who visits them and pollinates them? Certainly not honeybees. They can’t endure this climate. Bumblebees! that is who. They are hardy and well prepared for such harsh climate.

Let us look at one in particular, Ms. Bombus, a plump and fuzzy little lady that has been very busy for the past few weeks. She has found an abandoned vole’s nest; has redecorated it inside making it suitable for her coming family. She has prepared several enormous wax pots full of nectar or pollen. They are enormous compared to her size; to us they are nothing but thimblefuls. Then she has laid six little eggs that, by now, have turned into squirmy, hungry babies that she feeds several times a day, alternating with trips in search of more food.

Tonight, she is very concerned. She doesn’t need to watch the weather report on television in order to know that a cold snap is coming, colder than usual, that is. Bumblebees that live in other regions can wait to start a family until the weather is balmier but she doesn’t have that luxury. The growing season is too short so she had to speed things up despite the risk involved. The coming cold could kill her precious babies.

Fortunately she is well prepared to take care of them. She is covered with a thick and fluffy fur all over most of her body. On her belly she has a bare patch that reminds us of the brooding patch that many birds have when they are raising a family. So, just like a mother bird she lays spread eagled on top of her brood and thanks to her thick fur coat she is able to keep them warm for a while. Soon this is not enough because the temperature keeps dropping, so she begins to vibrate her strongest muscles, the flying muscles of her chest. This time she isn’t flying, just generating heat that is transmitted to the babies beneath her. She keeps shivering this way hour after hour, as long as needed. This effort uses up lots of energy and makes her very hungry. With great foresight she had placed her nursery and herself just on front of one of the wax pots brimming with honey, an excellent fuel, and she periodically drinks from it.

The night goes on, grueling and relentless, until finally the sun begins to shine and to warm up the fields. Only then can Ms. Bombus relax and rest, still covering her precious family a little longer. Later on, when it is warm enough, she moves away from the babies and with one final tender look at her wiggly and happy gang she heads for the front door. Bleary eyed and sore muscled, she faces her day job, a full day of gathering badly needed provisions for her brood and for herself.