What is native? What is not? When does it matter?

Definitions of native plants abound. None is entirely satisfactory in all circumstances but each may serve a specific function. Some strive for scientific accuracy; others serve practical purposes. Moreover, in some instances the nativity of a plant may not matter to the native-plant gardener. None of us is about to give up growing tomatoes regardless of their non-native status.

Some important concepts lack a perfect definition. We need to name them, nonetheless. Biologists would be lost if they couldn’t use the concept of “species” just because no definition fits all the circumstances. This word is not only important but absolutely necessary. One may need to use different definitions of “species” depending on the discipline; but that is no reason to give up the word. The concept of “native” organisms is equally necessary. It is here to stay, regardless of the difficulties that may arise at times.

Pollen is a valuable commodity. The less pollen needed, the more energy is left for other functions. Flowers resort to several strategies to economize on pollen. Some use a method called explosive pollination, others resort to buzz pollination. Both methods are well illustrated by official state flowers.

Mountain laurel (Kalmia latifolia), Pennsylvania’s and Connecticut's state flower, has a singular way to ensure that its insect visitors carry pollen to other flowers of its species. The unopened blossoms present little knobs which give them a funny look. Their function becomes apparent when the flower opens. They are pockets that hold the anthers trapped. Anthers are the part of the flower that produces male cells, pollen.

In most flowers the anthers are free and exposed to spread their pollen at the slightest touch of a flower visitor. The mountain laurel has a different strategy. The pollen is well protected against rain and wind; but, when a pollinator lands on the flower searching for nectar, the weight acts as a trigger, causing the taut stem of the anther to spring. The anther hits the pollinator gently on the back and gives it a dusting of pollen.

This method allows mountain laurel flowers to produce only a moderate amount of pollen because most of it ends up where it is intended, on the body of a pollinator, rather than being wasted in other ways.

Other flowers encase both the pollen-producing parts and the female parts, or stigma, into a sheath. Some members of the pea family, Fabaceae, have flowers that resemble a butterfly, this is why this subfamily is called Papilionoideae, papilio meaning butterfly. The top petal is large and shaped as the sail of a ship and is called the banner. Two side petals are called wings, and the bottom two petals are merged into one forming a sheath that encloses both the anthers and the stigma. This structure looks like the keel of a boat and it is so called.


When a pollinator lands on a blossom, its weight triggers a mechanism causing the keel to spread open and the anthers and stigma jump up out of the enclosure. This is called tripping. The insect has to be heavy enough to cause such reaction. Some bumble bees are pros at this task; honey bees, on the other hand, dislike being pounced upon. After a few times, they learn to sneak around and steal the nectar through a small opening at the base of the keel. Only novices perform pollination. Once they learn this trick no more pollen is transferred to the stigmas. Nevertheless managed honey bees are widely used to pollinate alfalfa and clover. Bee hives provide a large labor force that makes up for this deficiency. Some bumble bees, especially the short-tongued species, are also inclined to a little larceny. However, they are generally considered highly competent pollinators of alfalfa and clover.

Texas’ bluebonnet (Lupinus) and Vermont’s red clover (Trifolium pratense) need to be tripped. Six species of lupines, all of them called bluebonnets because of their appearance, live in Texas. All six of them are considered the state flower. The red clover, Vermont’s state flower, on the other hand, is not a native plant. It is an important crop used to feed livestock.

Other flowers make the pollinators work for pollen in a different way. Interestingly enough, honey bees never learned how to do the job I will describe, but native bumble bees and numerous species of bees are real pros.

In most flowers the pollen is made available to pollinators as soon as it is ripe. The anther splits open. We all have seen the golden dust many flowers have. If we touch it, it sticks to our fingers. Rhododendrons and azaleas do something else. They keep the pollen enclosed inside the anther. It can only come out through a small opening at the tip. Several other native flowers, like tomato and blueberry have a similar characteristic.

In order to extract it, the bee has to cling to the anther and give it a good shake. It accomplishes this by vibrating its flight muscles while keeping the wings still; it is like running the car engine in neutral. Pollen comes in clouds and clings to the body of the pollinator. Later, the bee proceeds to package its loot in the little baskets of the hind legs.

Other plants select their pollinator clientele through other methods. Some hide the nectar rather than the pollen. A different set of skills are needed to deal with these flowers as we'll see in the next post.

Posted by Beatriz Moisset at 11:02 AM No comments: 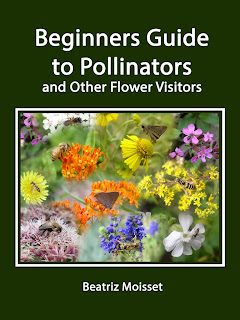 The Amazon edition of Beginners Guide to Pollinators and Other Flower Visitors came out just in time for Pollinator Week, 2015. 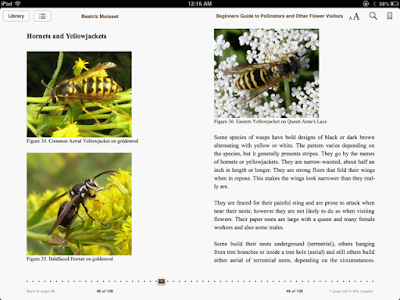 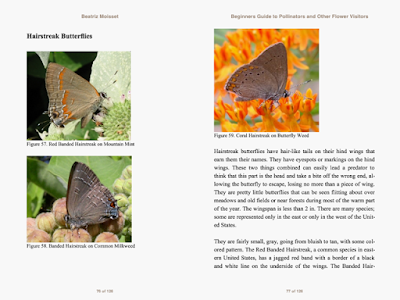 Posted by Beatriz Moisset at 5:29 AM No comments: