An illustrated beginner's field guide to insect flower visitors, including pollinators. The guide provides concise descriptions, photos and life history information of the most common insects found visiting flowers. It includes time of year, geographic area and favorite flowers. Also mentioned are those that act as pollinators and whether they may sting. 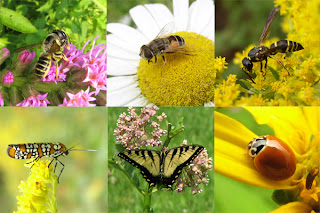 Guide to Flower Visitors
Available at Barnes and Noble, Lulu.com and iTunes

What is the Connection Between Honey Bees and Almond Farming?

These days we hear a lot about Colony Collapse Disorder (CCD) and other problems that plague bees and cause their numbers to plummet. We also hear about the concern for crops, that of almonds in California, in particular. Every year millions of bee hives are shipped to California to provide pollination for almonds during the brief period of their bloom. Beekeepers know that transporting bees and making them pollinate a monoculture such as almonds are stressful to them.

Statistics about the declining numbers of bee hives are confusing, at least to me. Some vary widely but they all indicate that numbers are down and continue to drop. What I find confusing is that you frequently hear about repeated annual losses of 50% or so. This would mean that, in a few years, bee populations would bee reduced to insignificant numbers. But this is not exactly what is happening. The situation is bad, but not extreme. This USDA graph published by Yale Scientific Magazine may help clarify things. Bear in mind that statistics refer only to honey-producing hives, not to hives used for crop pollination. There has been a decline of about 50% in the last 50 years, the most dramatic drop took place in the 1980s, when parasitic mites arrived in the US. Unfortunately, the graph doesn't cover recent years, though.

Even more puzzling is that, although the numbers of bees have been dropping, the acreage of almond cultivation has been growing dramatically in recent years. CCD or not, almond crops continue to be pollinated by honey bees.

My questions are: how do diminishing populations of honey bees manage to pollinate increasing numbers of almond trees? Does transporting bees annually have something to do with this pollinator's difficulties? We know that this is stressful to the insects. We also know that the convergence of so many hives from so many areas of the country into one point is conducive to the spread of pathogens. So, perhaps, this practice is contributing to the problems that bees face.

I have no answers, but hope that somebody out there does.