Where do pollinators go when it rains? You certainly don't see many of them around when it is pouring. They may be sturdy little fellows but they have some limitations. Wind or rain (or even cloudiness) can be too much for most of them. Cold weather also makes them think twice before going outside. 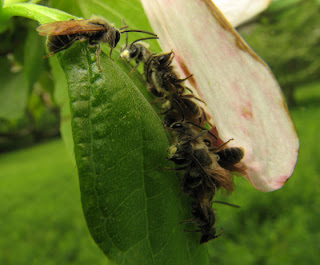 Gathering of male Andrena bees early in the morning

There are many different kinds of pollinators: bees, flies, butterflies, moths, and a few other insects; not to mention a few non insect ones such as many kinds of birds, bats and even a few other mammals. Let us look at one group in particular, bees. Bees probably do about 90% of all pollination so they deserve our attention. Bad weather is too much for most of them, but some fare better than others. A few bumblebees tolerate the cold of the Arctic Circle. Some bees fly at dawn or dusk or in the very early spring, although the majority prefers the daytime, sunny weather and warm temperatures. Wind is harder to overcome than chilly weather. There are physical limitations to flight, so when the wind reaches certain speed all flying insects find themselves grounded. That is why a steady breeze brings welcome relief from mosquitoes and gnats.

Rain is a serious problem to insects; a mere drop of rain is the equivalent of a big bucket to us; it would knock them down harshly. The weight of the moisture clinging to their bodies proportional to their own body weight would also be a major problem.

Insects are sensible enough to lay low when conditions are severe. Females return to their nests and stay there. Males, on the other hand, do not have nests to return to; they are not homemakers and know nothing about nests so they resort to a different kind of shelter. The males of many species seek each other company. They may stay in groups on flowers or leaves, or hanging from twigs. They clamp their strong jaws onto a twig and go to sleep this way. There are times in the early morning in which you can find one of these roosts. The insects may be dew covered and very sluggish and will need some sunshine before they can start moving around. Others cluster inside large flowers such as squash. These places offer some protection from the weather. 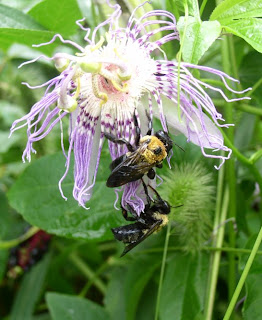 Carpenter bees spending the night clinging to a Passionaria flower

Probably these roosting places are not as secure as the nests where the females stay and this may very well be one of the reasons why male lives are shorter than female's. Males only mission in life is to mate; after that they are dispensable. Females, on the other hand, need to live a little longer in order to build nests, gather food, lay eggs and seal the entrance to their nests.

Sometimes, after a particularly rainy spring, trees produce very little fruit and one wonders about the connection between the abundant rain and poor crop. What happens is that the pollinators didn’t have enough opportunity to visit flowers because of the weather.

It is interesting that many native bees can face these hardships better than honey bees and turn out to be better pollinators under certain circumstances. Honey bees are very quick to return to their hives when weather conditions are poor. They also work shorter hours, starting later in the morning and quitting earlier in the afternoon. Some bee specialists say that native bees and bumblebees are not unionized and find themselves forced to work longer hours and under poorer conditions. 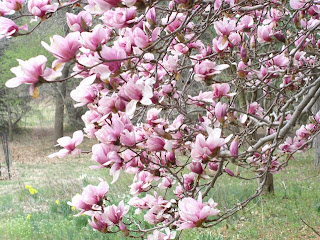 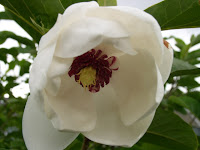 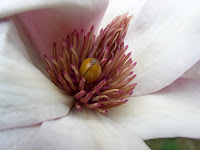 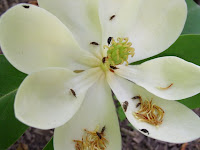 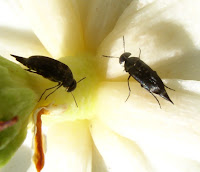 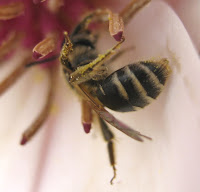 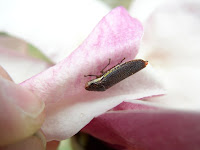