BUMBLEBEES. Are Some Bumblebees Going the Way of the Dodo? 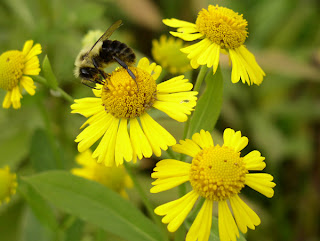 Who doesn't like a bumblebee? With their plump, fuzzy bodies and striking black and yellow or black and white stripes they easily capture people's hearts, especially when they are seen buzzing around from flower to flower. 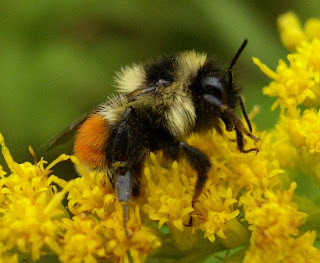 What most people don't know is that some species of bumblebees are in decline. We have heard about the plight of its relative, the domestic honey bee; but haven't paid much attention to the situation of this wild cousin. Why should we care? It isn't just because bumblebees are charismatic, but also, and more importantly, because they play key roles in certain ecosystems. So far, we know of only a few species that are showing a reduction in numbers, both in North America and in Europe. It isn't as if all the species of bumblebees were going extinct overnight; fortunately some species are doing well, even in unexpected places such as suburban gardens. But, perhaps we should start paying attention to what is happening now rather than when it is too late. Besides, it is possible that many other species of wild bees are suffering similar declines in their numbers and we have no way to estimate what is happening because we know so little about them. 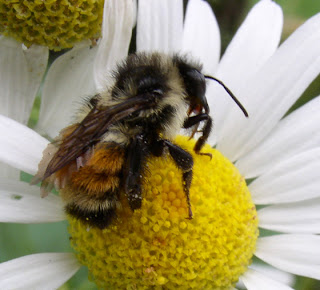 Here are some of the things that bumblebees do: they pollinate 15% of our food crops, worth about 3 billion dollars; they also pollinate countless wild flowers. Wildflowers are important not just for their beauty, but also for the seeds and berries that they produce. They become food for many species of wildlife, from birds and small rodents to large animals such as bears. Birds don't know what percentage of their food crops are pollinated by bumblebees, but it is possible that for some species is closer to 90% than to 15%. If we are not worried about our own food, we should worry about all the many species of birds and other wildlife that may be suffering because of a reduction on the numbers of wild bumblebees. 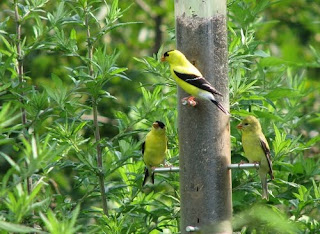 Goldfinches and many others owe their food to hard working pollinators such as bumblebees.
List of articles
© Beatriz Moisset. 2010
Posted by Beatriz Moisset at 10:49 AM