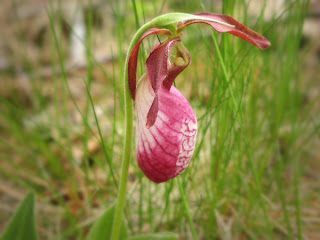 In most cases the relationship between flowers and their pollinators is a wonderful partnership in which everybody wins; but there are exceptions. In some cases, insects exploit flowers and take their offerings without returning the favor and in other cases it is the flowers that exploit their visitors.
Many orchids use a wide range of deceptions; some, such as the lady slippers, engage in a rather innocuous deceit that only causes the insect a minor inconvenience. This flower has a very peculiar shape, with the lower petal expanded into a bag. The purpose of this bag is to act as a temporary trap.

The drawings show a flower cut through the middle to illustrate what happens. 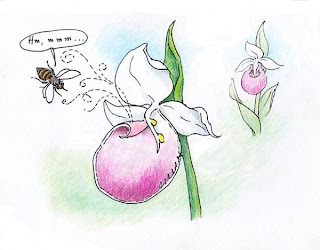 It is not known exactly what the attractant is, but it is powerful enough that several kinds of bees come to the flower seduced by its appeal. 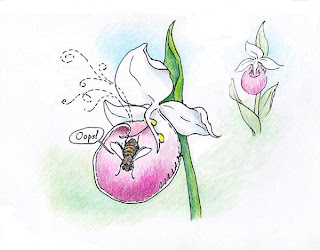 The bee perches on the edge of the sac and often loses its footing and falls inside; once there it struggles to get out but the inside is slippery and the curled lip of the bag makes it hard to get out. Fortunately for the bee there is a escape route. 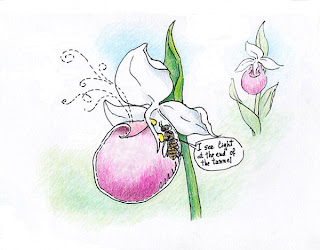 Toward the back of the flower there is a ladder made of hairs that leads to a tunnel. There is a sort of skylight at the end of it to guide the disoriented bee, so even though the passage is narrow the bee strives tenaciously headed toward the light. In doing so it rubs its body against the pollen sacs, called pollinia, which get glued to its back. 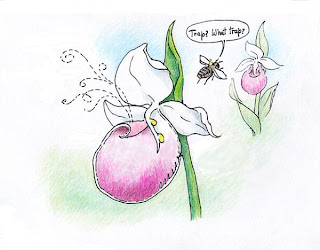 Once outside the bee flies away; its little brain can remember the unhappy experience long enough to travel some distance from the plant that it has just visited. But most likely, it will repeat this adventure when it finds another lady slipper some time later. At this point it will leave behind the pollinia that it has been carrying inadvertently, performing pollination of the lady slipper and getting no reward for its labor.
Posted by Beatriz Moisset at 1:10 PM