For the Love of Flowers

Andrena, the bee, was sleeping her long slumber, comfortably inside her underground refuge, when something began to arouse her. She had been born the previous spring inside this cozy underground cell and she had grown well nourished by the mixture of flower’s nectar and pollen that her provident mother had stored. Later on, like the sleeping beauty, she had fallen into a deep trance for many months. But now it was spring and the soil was beginning to warm up. Did the warmth wake her up? Or was it some mysterious internal calendar? Suddenly that cozy cell that had been her nursery, her castle, her realm, her whole universe through the hot months of summer and cold ones of winter had become an intolerable prison. She had to get out. 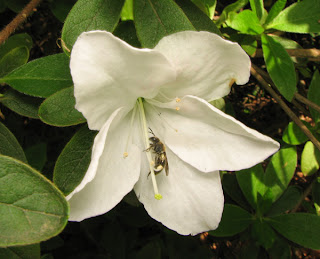 Moved by this urge she began digging her way out. Her legs, never used before, were powerful enough to start loosening the earth that blocked her way to the outside world. With an unerring sense she moved toward the surface, perhaps following some ancestral memory of that world.

The task was arduous but she was young and strong and determined to find her way. It took her several hours and when her head finally emerged at the surface all her senses were bombarded by an accumulation of new sensations: light, colors, smells . . . She tried her wings for the first time and suddenly she found herself airborne. She marveled at her capacity for flying, zigzagging, rising and falling, making sudden turns. The surrounding world, immense and full of sunshine and strange sights, and her just discovered faculties were intoxicating. She kept coming and going taking notice of this unfamiliar land of her birth and its landmarks. She didn’t seem to get tired; there was so much to see. A hungry bird tried to catch her and missed, not because of her skill, but by sheer luck. She would learn to be cautious later on.

That morning she learned that she belonged to a small village of bees that, like her, were emerging from their prolonged sleep and getting drunk on light and air and new experiences. Their wings reflected the rays of the sun. Sometimes, if you walk on a meadow at the right time, you can see them against the sky like constantly moving dots of light.


There were some males among them; some had emerged the previous day and now, past their first exhilaration they were moved by another urge that kept getting stronger by the minute. The scent of the females acted like a magnet and several, full of eagerness, approached and surrounded our little bee. She resisted their advances, not for lack of desire, which she was beginning to discover, but because she wanted only the best suitor. That would be her legacy to her children: the best father that she could find. One male prevailed over the others and joined with her. Now, in delirious ecstasy, both of them, linked by love, rose in the air and flew to a nearby branch where they could enjoy their time together in seclusion.

After their romance and carrying inside herself the sperm of the male, Andrena became all mother. Only one motivation would dictate her actions from now on: to ensure the best for her future children. She was passing on her mother’s heritage even though she would never know neither her mother nor her children.

She started the search for a nest site. What better place than the one her mother had chosen the previous year? It was a patch of soil, warm and with plenty of sunshine, safe from floods and not chocked by vegetation. She landed and started walking in circles looking for the best spot, but somebody else, perhaps her own sister, had already started setting housekeeping there. An angry buzz let her known that she was not welcome nearby. No problem, there were several similar spots not far from this one and she had no trouble finding a good one.

Andrena began digging the hard soil, just like her mother had done a year ago. It was harder than digging up from her cell; the soil was compacted and she had to use all the energy of her young jaws and legs. She kept working full of determination until she realized that she was getting hungry and thirsty.

She flew away from her nest searching for food. A delicious aroma told her that she had found what she was looking for. There were many flowers in the meadow, she landed on an open blossom, found its nectar guided by the scent and drank it thirstily. Andrena went from flower to flower until satiated, then returned to her task.

Back to work she went digging deeper and deeper. Evening came and she needed to rest. What better place than the tunnel she had dug? It was safe there and protected from the night chill. Andrena slept comfortably. The next morning, when her muscles were warm enough, Andrena resumed her work until something told her that she had arrived at the right place; then she started digging a side cavity, this one was a chamber like the one that had sheltered her through her infancy and long sleep.


Now she needed to prepare the chamber for her offspring. That meant many trips to the meadow full of flowers. There she loaded rich pollen in the baskets on her legs and nectar, which she carried in her crop. It took her many trips to have enough for her purpose and another day passed by. She kneaded the pollen and nectar into a thick paste and made it into a tidy ball that nearly filled the whole cell. Satisfied, Andrena laid an egg on top of this loaf and sealed the chamber with some soil

Once again she kept digging another branch of the tunnel, making a new chamber, gathering food, laying a new egg and so on. The days flew by. Sometimes she couldn’t go to work because the weather was foul so she hunkered down, feeling safe in the darkness of her tunnel. One day our little bee escaped a sudden death without knowing it. When she approached a blossom she noticed something different but didn’t give it much importance. Fortunately for her, another bee beat her to this flower. Somewhat annoyed Andrena flew to another one without noticing that a crab spider had caught the other bee in her clutches and paralyzed her with her poison.

All that coming and going wore out her thin wings. They began to fray at the edges and so the day came when, after gathering her usual load of supplies in the meadow, she tried to take off but the extra weight and her aging body and worn out wings prevented her from doing so. She tried again and again but the wind kept slamming her against the ground. So finally, with a sigh and without regrets she surrendered to her fate, knowing that her mission was complete, the new generation was well provided and would repeat the story next spring.

Thus ended one little life made of flowers and sunshine, of dark tunnels and security.