My bees and climate change 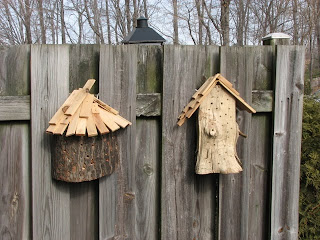 It is February 16th and the weather forecast for the next few days shows temperatures in the sixties. I am concerned about my bees. I hope that they don’t wake up too soon.
I have been raising native, solitary bees for the last few years. They are not like honey bees: they don’t make honey or wax. They live alone, each mother raising her own babies. They are gentle and not prone to stinging. I am also told that, if they do sting when molested, their venom is very mild compared to that of honey bees and yellow jackets.

I am not interested in honey or wax, so this matter doesn’t bother me. I like these native bees because they are very good at pollinating wild flowers; they also pollinate some fruit trees and other crops just like honey bees.

My bee houses don’t look like hives at all; they are blocks of wood with holes about the size of a pencil. Each mother bee claims possession of one hole, then she gathers enough pollen and nectar for one baby, lays an egg at the far end of the hole, builds a wall with clay and starts a second cell for the next baby until the whole tube is filled. Then she double-seals the entrance with clay and starts another nest if she has enough time. These bees are very short lived and by June they are mostly gone; if you see one at that time, its wings look frazzled and you can tell that it won’t be able to fly and carry pollen much longer.

Be it as it may, the system works quite well for these bees. Each spring a new generation emerges from the nest and starts the cycle again. Yes, the new generation has been out of sight all that time. The egg laid in the previous spring became a hungry grub that ate all the supplies, then it metamorphosed, first into a relatively immobile pupa and then into a winged adult. Without ever leaving the nest it went to sleep and stayed put for all those months of summer, fall and winter.

How do they know when it is time to emerge and leave the nest? It may be a combination of a biological clock and weather conditions. The fact is that they emerge in the spring, just around the time when numerous flowers, rich in supplies, are blooming. 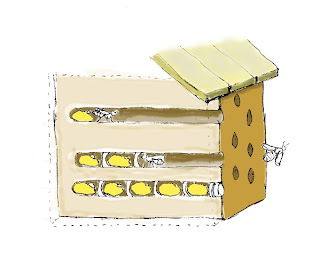 My bees found the recently placed bee houses three years ago in mid-April, when the weather was quite balmy. Who knows where they came from but come they did and built their nests. The next year, there was a sudden burst of spring weather, warm and sunny, on April first. Taking the cue from the weather they started chomping away the hard clay front door and inner partitions built by their mother almost a year earlier and hurried to leave the nest, buzzing along; the ones farther back pushing their brothers and sisters in their urge to see the world.

The next few days my bee houses buzzed with activity: flirting, mating, inspecting the now empty holes, as well as any other hole of a similar size. Soon only the females remained. They kept coming, loaded with supplies and disappeared inside. Sometimes they spent some time sitting at the door, only their antennae sticking out. They seemed to be munching on something now and then. Who knows where the males went after they mated! This is their sole contribution to the next generation.

A year later the first spring-like day was March 19 and just like the previous year, although almost two weeks earlier, my bees emerged and started their activities, no less entertaining for the fact that I had seen it all the previous year. Actually there is always some novelty; you notice new details for the first time and marvel at the things such tiny and alien looking creatures are capable of.

But now, it sounds like there will be a balmy warm day in the middle of February, despite the heaps of snow still present on the ground. What will happen to my bees? Will the biological clock prevail over the cues from the weather and will they wait for the second bout of spring weather? Or, will they emerge too soon? There is no food to be had anywhere for them, no flowers. . . Some of the flower bearing plants haven’t even begun to grow because the snow storms have been hard and heavy and the ground hasn’t had time to thaw, nor the plants a chance to grow.

What will it be? As I write this I wonder what to do if my bees show up tomorrow: supply them with some small containers of sugary water? That may help, but, do I want to interfere with nature? These things may have happened many times before and the bees survived well enough to this day. However, it is possible that climate change has been accelerated by humans; this change might be too fast to allow some of our precious creatures to adapt. If bees and flowers get out of sync they will suffer. They may even be pushed to extinction. I sit and wonder.