It continues to amaze me how little we know about pollinator moths, aside from a handful of the more familiar ones. I will be covering a couple of families, somewhat related (they are members of the superfamily Gelechioidea) which is part of a larger and loosely defined group called microlepidoptera. The main thing microlepidoptera have in common is their small size, but many may not be related.

The two families I mention here may or may not be pollinators; all we can say for certain is that they visit flowers. It would be nice to know more.

Among the casebearer moths there is a handful of species known as seed casebearers. As the name suggests, the caterpillars carry a case which serves as refuge. The seed casebearers feed on seeds, rather than other parts of the plants. The adults are silvery, with long antennae. When the wings are folded they are long and narrow, like little cigars. They can be seen at flowers of the daisy family. Not much else is known about their activities.

The other flower visitors in this group of moths belong to a family with a difficult scientific name, Xyloryctidae. Fortunately the common name is nicer and self explanatory: flower moths. They look very similar to the members of the previous group. They are small and hold their wings in a similar position. These moths fly during the day and are often seen nectaring at flowers. In this case, we can be a little more certain of their function as pollinators. 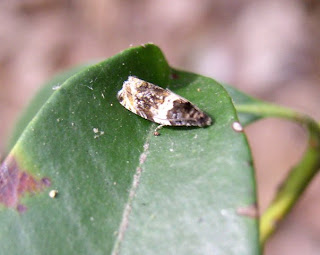 We are very familiar with the pollinating role of butterflies and we are aware that a number of moths, such as the hummingbird moth also visit flowers frequently and provide pollinating services. But we seldom pay attention to the countless other flower-visiting moths and their roles as pollinators.

The black-and-yellow lichen moth is a very attractive, rather slender moth often seen visiting goldenrods and some other flat, open flowers. It is widely distributed throughout the continent, from Canada to Texas and Mexico. Adults fly from June to September. The larva may take longer than a year to complete its development.

Its wings are black and yellow or black and orange as its name indicates. The body and legs are black or blue-black. The caterpillar of this moth and a number of its relatives feed on lichens; that is what the other part of the name refers to. It resembles the lichens it feeds on in color and appearance; a convenient disguise that hides it from predators.

The adult performs another interesting trick of mimicry. It bears an astonishing resemblance to some beetles, called net-winged beetles, especially the end band net-wing or Calopteron terminale. These beetles are poisonous and are avoided by hungry birds. The contrasting colors serve as advertisement of their bad taste. The black-and-yellow lichen moth is also poisonous and so is the orange-patched smoky moth, another one with a similar pattern. The resemblance seems to be beneficial to all of them. Birds need to learn only one kind of warning signal to avoid all these unrelated species and so more beetles and moths survive than if they exhibited different alarm signals. This is called Mullerian mimicry in honor of Muller, the first one to describe and explain this phenomenon.


Little is known about the black-and-yellow lichen moth's role as a pollinator; but given its flower-visiting habits it is almost certain that it performs this function. This is just another example of how much we need to learn about moths and their role in the ecosystems. If anybody reading this knows of some information on the subject, please, point me in the right direction. We all need to learn more about this and many other moths' capacity as pollinators.

See: Bugguide.net
Moths as Pollinators
List of articles
Beginners Guide to Pollinators and Other Flower Visitors