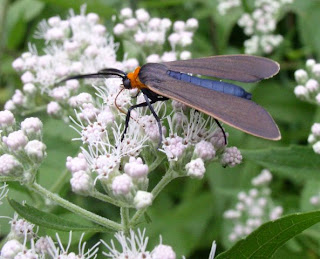 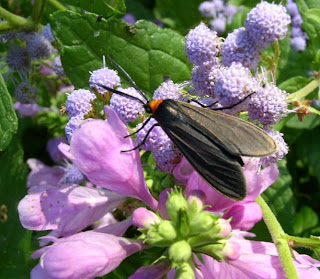 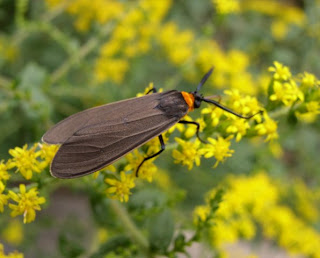 It is nice to talk for a change about a moth pollinator that is a little better known. The yellow-collared scape moth or Cisseps fulvicollis, is an avid visitor of a large variety of flowers and it is large enough and colorful enough to be noticed by many.

The wings, head and appendages are slate-black. It has a bright collar, that it is usually orange, rather than yellow despite its common name. The body is metallic blue. It is considerably more common than its relative, the black and yellow lichen moth.

It has been reported nectaring at a wide array of flowers of different families, both during the day and after sunset. Milkweeds and asters are among the most commonly visited; also sunflowers, goldenrods, blazing stars and smartweeds. They take nectar from several of the eupatoriums, such as boneset and Joe-pye weed. 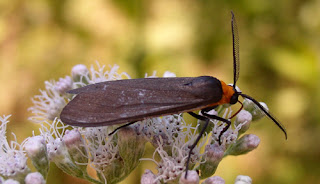 Their association with Eupatorium is interesting because these plants carry toxic alkaloids which seem to provide a defense against predators. It is usually the adult male that feeds on Eupatorium and it passes the toxins as a gift to the female when it mates. She, in turn, gives them to the eggs, protecting them from predators.