The Yucca Moth and the Yucca 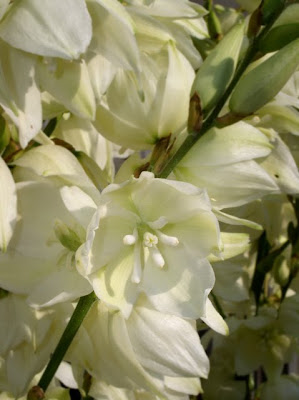 Yucca (Yucca glauca), the state flower of New Mexico, illustrates an intimate relationship between a specialized pollinator and its equally specialized flower. The plant and the insect co-evolved; that is, they developed in intimate connection with each other. This is called an obligate mutualism in which if one were to disappear, the other would follow the same path. Originally it was a relationship of exploitation, with the moth larvae feeding on the seeds of the yucca. But, eventually the plant devised methods to take advantage of the situation and as a consequence, the moth also evolved to ensure food for its babies and preservation of its food plant. 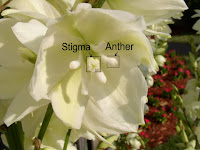 Yucca flowers open for a few days, attracting a variety of insects during day hours; but they produce more nectar and send their strong and sweet aroma at night. Flowers with these characteristics are usually pollinated by moths or other nocturnal pollinators. 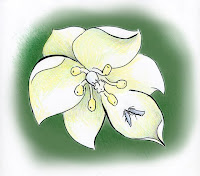 The yucca adds a special embellishment to this arrangement; of all the insects that visit its flowers, the only ones that can accomplish pollination are the yucca moths (Tegeticula yuccasella and Parategeticula depending on the species of plant). 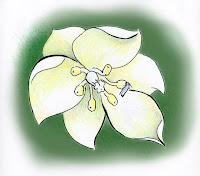 Yucca moths are small, white, not very noticeable. They spend a good part of their adult life inside the flowers of the yucca, meeting members of the opposite sex and mating. Once mating has taken place, the female, very purposely visits the male parts of the flowers (anthers) to collect pollen which she stores under her chin. 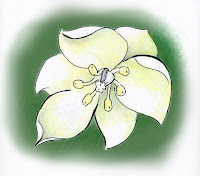 Later, she flies to another flower, inspects it carefully, and if no other female has deposited her eggs, she proceeds to do just that. She refrains from laying more than a small number of eggs. The larvae will feed on the seeds of the plant. She seems to know that if she gets carried away and lays too many eggs, the flower will abort rather than produce a seedless fruit. It would be a no win situation, both for the plant and the moth.

Then, just as purposely as before, she goes to the right place, at the top of the ovary (called stigma), and deposits some of her precious cargo of pollen from under her chin, ensuring, this way, that the seeds will grow and feed her babies. She repeats this operation in other flowers.

The larvae feed on some of the seeds and there are enough left for the plant to reproduce. When fully grown, the larvae drop to the ground, where it goes through the transformation called pupation and finally it emerges as an adult several months later to repeat the cycle.

Without this insignificant little moth, the landscapes of the west would look dramatically different in the absence of yucca.