A tale of pollinators and pollination

as told by the official state flowers 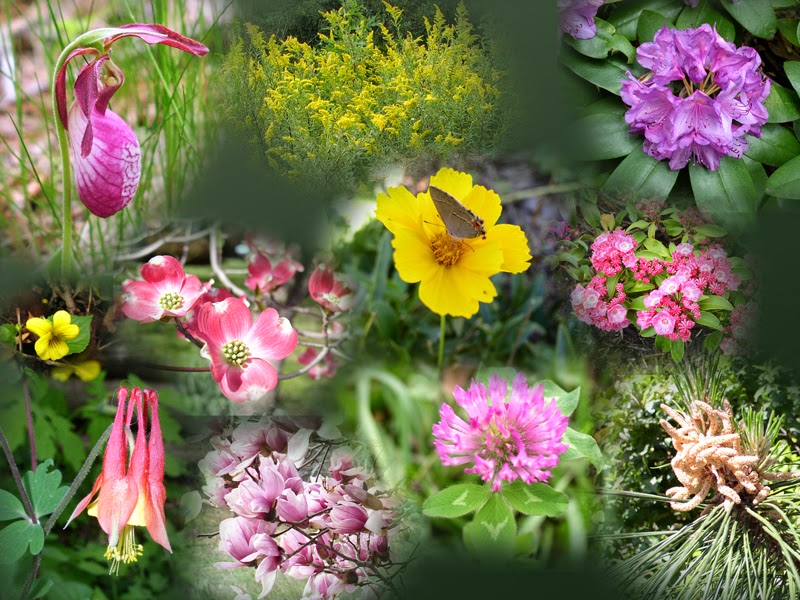 We love flowers for their beauty and for the impact they have on diverse aspects of our lives. That is why we honor them by choosing an official state flower for each state of the union. A look at the list of state flowers reveals an amazing variety of shapes, colors, perfumes and blooming seasons. Some flowers are open and rather flat; others are elongated, trumpet like, with spurs, or intricately shaped. They may be grouped in clusters or stand alone. They come in a rainbow of colors and their scents are equally varied. Some bloom briefly in just one season, others do it for a longer time.

Why do plants have flowers and why is there such a variety? We seldom think about a flower’s function.  Some even feel that they were put here for our enjoyment. The fact is that their whole purpose is to attract pollinators, those love messengers that carry pollen from blossom to blossom ensuring the development of fruits and seeds and thus the future of the plant’s species. The great variety of flowers is a sign of the diversity of their pollinators. Both the flower and the pollinator complement each other to the point that, in some cases, only one kind of pollinator can perform the job for a particular kind of plant. This mutual fine tuning is the result of a long process of co-evolution. Often one can tell the type of pollinator by looking at the structure of the flower. For instance, flat, open flowers can be pollinated by short tongued insects; longer ones require longer tongued visitors. Tubular flowers are often pollinated by hummingbirds or very long-tongued moths. Night-bloomers are pollinated by night-flyers such as hawk moths or bats.


We often think of the honey bee as the ultimate pollinator and we seldom recognize the fact that many other insects, as well as some other creatures perform that job, in fact many plants have absolutely no use for honey bees. It is true that honey bees are incredibly adaptable and that they visit a wide array of flowers through several seasons, we could say that they are “Jacks of all trades” but we must remember the second half of that saying: “and masters of none”. In many instances flowers fare better in the absence of honey bees because some of them have developed a long standing partnership with their respective pollinators. Honey bees could interfere with such specialized pollinators.

Years ago, I was looking at a book on state flowers and was astonished at their variety. It occurred to me that it was possible to teach an entire course on pollination using state flowers as examples. All it takes is one look at the assortment of state flowers to see that there must be a similar diversity of pollinators belonging to several different groups of animals, not just bees, but also flies, butterflies, moths, beetles, and even bats and birds. Maybe some day, the states will recognize the importance of pollinators and decide to honor them also. After all, flowers would not exist without pollinators.

Curiously, thirteen states have chosen official state flowers that are not native and therefore not truly representative of the state. Fortunately seven of them decided to add an official state wildflower, for instance, the state flower of Ohio is the carnation and its wildflower is the white trillium. I will mention a few of them because they contribute something valuable to this tale of pollination. In other cases, I will refer to the state tree if it bears flowers that add something to the pollination story.

One may wonder why some states chose flowers native to the old world rather than those that represent the state flora. It seems that state flowers were chosen more for their beauty, or economic importance. Perhaps part of the explanation is that this is such a nation of immigrants that many people are more familiar with the rose or the carnation than with any local flowers. Economic importance counts too. Thus, it comes as no surprise that Florida chose the orange blossom as a state flower.

In a few cases there is some confusion about the choice of state flower. This is not surprising considering that legislators are not botanists. The common name could include only one or several species of similar plants. Which one of several violets is the state symbol? Those states that chose the rose, were they thinking of a native species of rose, or one of the common cultivated varieties? Different sources give slightly different interpretations to these choices. In general, I will follow the scientific nomenclature used by the United States National Arboretum, but I may include other interpretations in some instances if they illustrate an interesting pollination point.

Here is the story of pollination and pollinators as told through the examples of official state flowers. In the next post I will describe the kind of pollination that took place long before there were any insects or other animals to do the job, in fact, long before there were flowers. Then, I will examine the earliest forms of insect pollination. In following posts I will cover an assortment of floral strategies, from the ones that attract hordes of different pollinators to the specialists that prefer to deal with a select number of helpers or even just one. I will include some strategies that include nasty tricks played on pollinators and also an intriguing phenomenon, toxic nectar. It makes one wonder why a flower would want to make its pollinators sick. I haven’t forgotten pollinators of a different kind, non-insect ones, birds and bats. Finally, to wrap up this tale, I will take a look at state flowers and pollinators of economic importance.

More on pollinators and state flowers


Before there were Flowers: Wind Pollination


The Earliest Pollinators: Beetles and Flies

Mass Appeal and Pollination
This Way to the Restaurant
References
US National Arboretum. Trees and Flowers
State Symbols, USA

Posted by Beatriz Moisset at 4:57 AM